Dark Angels Interrogator Chaplain Caphriel is the main character of  the story line. An ancient and well decorated veteran given the task of hunting for The Fallen.

From way back The Dark Angels Space Marine Chapter has been my favorite. They have lots of awesome special characters and special units but I decided to go with an original character to have more freedom; meet Caphriel. 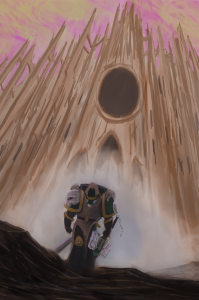 I’m not gonna delve into the Dark Angel lore to much – I don’t know it well enough – but I some characters might appear at some point, probably  Interrogator-Chaplain Asmodai – being the boss and all.

The hunt for the fallen

Having been around for a long, long time and having achieved what he have Caphriel has been accepted into the inner circle of the Dark Angels learning the chapters darkest secrets; The hunt for the fallen.

Caphriels search has never led to an actual catch of a fallen but this time it shall not fail.

Caphriel travels with a retinue of veteran space marines. All are proven battle brothers and highly decorated. Yet they do not know details abouth the true nature of their hunt. They believe them selves to be a mobile strike force hunting chaos where they find it.

Since Space Marines usually wear Power Armour there is really only the head to pimp.

As for the head I designed him with a skull-like look. His face was burned of in a campaign centuries ago leaving a paperish textured skin.

I wanted to avoid the tattooed look so I went with a Dark Angels symbol molted into the back of his head.

Bearing an ancient Artificer Chaplain Armour Caphriel stands out from most of his battle brothers. His left shoulder pad doesn’t have the normal Dark Angels Winged Sword symbol, but a sculped model of the Death Angels holding a sword and an inscripted shield. The right pad is one big skull  symbolizing his status as a Chaplain.

His chest plate has another sculped Death Angels holding a book. As for the knee pads, we have one skull and one in the shape of a lion head. Another Death Angel at the left leg and thats it for the customized stuff. The rest is more standard black power armour. 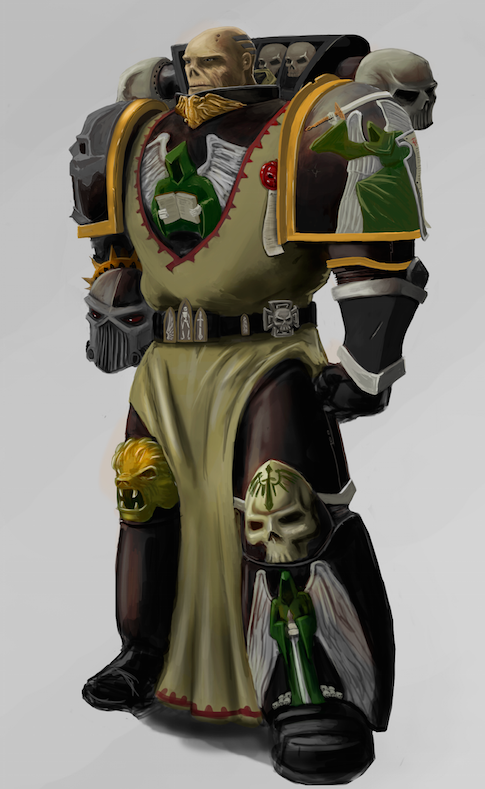 I guess this is enough for the first introduction. I’ll post more paintings and background as it developes.