I have an idea for a somewhat quick and dirty Warhammer 40.000 army builder.

Instead of trying to create a database of all units with rules and costs from the 40k universe, which I know others try and do better than I ever could, I will try to create a simpler app, where you add your units categorised by type (HQ, Elites etc.)  and enter the point cost yourself. The app will then keep track of the overall cost of course.

Once you have your army entered, it will be saved to your profile and from their you can create Battle Forces ( lists) by selecting from your army and edit and update any units you need to tweak,

So the main features will be, army creation, unit creation and creation of battle forces based on your army.

Not surprisingly, we need to be able to create an army. Here is basically about giving your army a name and a description.

Since this is a free-for-all input, no need to choose faction or lock the army into a specific path.

A couple of quick wireframes on how it could work. 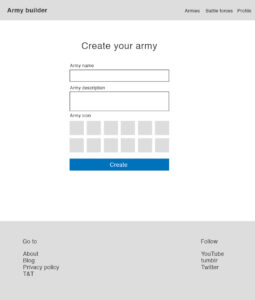 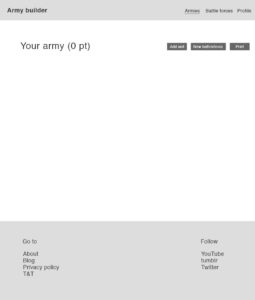 Add units to your army. There is some flexibility here, so you choose whether you want to add a single unit or a squad. Since you control the input, you can organise your army to your liking.

Inputs needed for a unit:

The army’s total points will be a sum of these. Meaning, the app will not know the rules or points, but simply be an easily accessable interfase to keep track of your army. 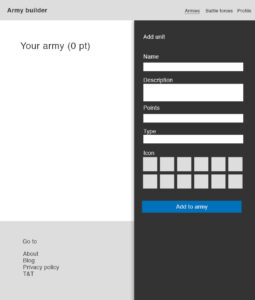 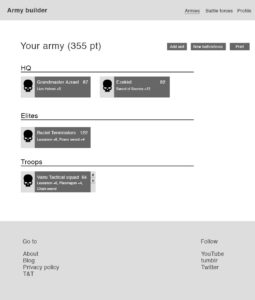 The point cost for you Battle Force will be a sum of all your units. 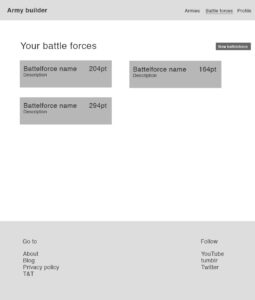 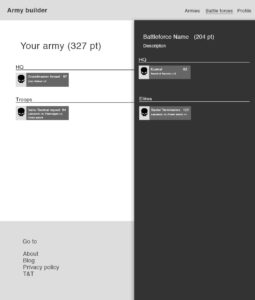 That is my initial thoughts on a simple army and list builder web app. I have begun the POC and will uploading a video soon on where I am now.

Please leave any comments and thoughts below.

One Reply to “Warhammer 40K army builder #1: Introduction to the project”